Introduction to The Drake Equation 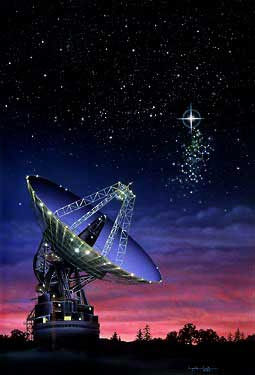 I really shouldn't go on without at least an introductory mention of the famous (and controversial) Drake Equation created by Dr. Frank Drake in 1960.

Dr. Drake's equation is a tool for estimating the number of intelligent advanced civilizations presently in the Milky Way galaxy that we would theoretically be able to communicate with.

The Drake Equation is

where N is the number of civilizations we can communicate with at this time in the galaxy, and where:
The values in the parentheses are Dr. Drake's estimations. Using Dr. Drake's original values we arrive at N=10. As new data rolls with increasing frequency, these values tend to change. For more discussion see below.

As mentioned above, as new data rolls with increasing frequency, these values tend to change. Presently, the value for R is thought to be 6 per year. And, as mentioned a few times before in other postings in this blog, we are increasingly discovering certain intelligent traits first thought to be reserved just for humans cropping up in other animals: birds that make and keep tools, ferrets purposefully lying, and dogs mapping language to mention just a few. This indicate that the first estimation for fi (a mere 1%) may be too low.

If, however, sentient, intelligent life is so rare that we are the only one in the galaxy, or even the universe, then the vale for fi may be infinitesimally small. But, if we are the average result of habitable planetary system, and if life is found to have once existed on Mars, and to exist on Europa, then the value for fi becomes 33% (and ne becomes 3). That life formed quickly on Earth, a wet rock orbiting an average star in a nondescript part of the galaxy, then maybe, just maybe, it can form in extrasolar systems as well.

Calculate N for Yourself

Personally, I believe the habitable zone estimates are a bit conservative. For instance, Jupiter's moon Europa, despite being outside of our solar system's Habitable Zone, may have liquid water beneath its icy surface, and many scientists feel that Europa could support life. Thus, Habitable Zones could actually be larger, or a system could have Habitable "Hot Spots" (which includes not only planets, but large moons as well) in addition to its Habitable Zone . Maybe even an occasional type M stars could have habitable planet (see Color of Life for some discussion about life in a M class star system).

In addition, the equation does not take into account life that is spread to other planets by advanced civilizations (whether unintentionally from exploration or purposefully from terraforming). And finally, life is constantly surprising us with its great diversity here on Earth - our definition of what is life may need to be expanded.

Drake overlooked several factors. It is almost certainly impossible, even if we knew several alien races, to determine a universal lifespan for civilizations, for each case is different. Space colonization would completely screw up the numbers. And it is far from certain that the Universe have been as suitable for intelligent life as it is now for any large fraction (in time) of its existence.