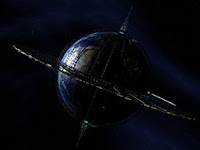 "Enclosure" (c) DigitalBlasphemy.com
Of the five areas of speculation on alien technology - what it will be influenced by - sociology/culture is, in addition to theology, one of the most speculative! How can we even begin?

One way to begin is to study the social patterns of animals, and how they behave in groups (or if solitary creatures, how they behave). Yes, these are Earth animals, affected by an Earth environment, but it does give us some tools to work with - there is a logic, if you will, involved in why certain social systems instincts develop in animals, a logic of survival. Without this logic of survival, would there be much of a chance for the development of sentient beings?

By the way, if some of discussions in this blog sound like discussions relating to a mathematics equation, that is because on level it is. As Galileo Galilei said, "mathematics is the language with which God has written the universe." This is one reason why I hypothesize that there is a universal biology, that underlying all the great and incredible diversity in life are some basic universal biological laws which are the "natural" result of universal physical laws (see the blog post "Repeating Patterns - Universal Biologies" for some preliminary thoughts related to this).

There is, though, one variable that is quite difficult to nail down. While animals mostly have social structures that are instinctual, humans have social structures that are a result of a combination of instinct and abstract thought. And it is when we deal with abstract thought that the greatest difficulties in speculating alien technologies arises: abstract thinking can confuse, can create different interpretations from the same data, and influence sentient beings in similar physiological and environmental conditions to evolve very different social and cultural systems.

However, studying the great diversity on Earth has drawbacks - it is just one "experimental" laboratory. We don't know the full extent of diversity that can arise with life originating and evolving on very different environments. Universal biology will allow for more diversity than our little blue marble: " There are more things in heaven and earth, Horatio, Than are dreamt of in your philosophy" (Hamlet Act 1, scene 5, 159–167).

For instance, maybe life, when it first forms, has different paths it can take, that once a path is taken it is fairly locked in - all life following having a propensity toward a set of behaviors, all of which self-reinforce the path. Thus, just because animals on Earth tend to, on average or in general, behave in a certain way under conditions x,y, and z, it does not follow that we can apply that knowledge to alien species - even if the alien planet is remarkably like the Earth.

Another question to ask is how much of an influence on the creation of social structures, systems is luck, chance, or randomness? How much is a social system the product of the people in it (alien or human) and how much of it is a product of a charismatic leader figure bending the social system to fit his or her own opinion or philosophical view of the life? Are the appearances of charismatic leaders predictable in some way, due to biological and environmental laws? Or are their appearances flukes, luck, chance (*)? If the latter, then here we have another example where you can have two virtually identical planets, with virtually identical life, and still have very different societies. And you don't even need charismatic leaders - as we see with twins, virtual duplicates living in the same environment will still be different.

This leads me to yet another way we could begin to speculate - we can take what we do know, and subtract x, or y, or z and contemplate on what would be the difference in human society, on human technological development for the removal of that one item. It would give us more data to play with - it may not be much, but it is something.

So, when speculating upon alien realities, I posit that most advanced sentient societies would want to survive (various smaller sub-groups may not, of course). Those that do not, while it would be also interesting to speculate on them, they would be of small concern as they would not last long (unless they were zealots about it and wanted to take all other life with them wherever it could be found). And thus, one of the forces will be a logic of survival (though that can sometimes be subverted or overruled by abstract thinking). I posit that there are universal biological laws which, while allowing for a great diversity - greater than we can yet imagine, will have an influence on the development of social systems.


* Of course, charismatic leaders would only work on a species that can be emotionally manipulated. However, for such species of advanced sentient life, there can be other ways an individual can have a large impact or influence on the development of its society.
Posted by David M. Merchant at 10:31 PM

Yes there can be intelligent life who cannot be manipulated by charismatic leaders. It may even have existed on Earth in the form of prehumans.

Diversity encourages innovation. More ideas to pick up and toose who do get advantages. Trying to suppress ideas becomes suicidal.