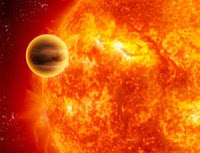 Scientists have discovered that WASP-17 is orbiting its star in the opposite direction (retrograde) of its star's spin. Most planets orbit their stars in the same direction of their star's spin. WASP-17 must have had a violent past, such as a near collision early in its life, for it to be in a retrograde orbit. Because of this violent past, it does not have a circular orbit.

This got me to wondering - if, in this possibly infinite universe, there exists a life harboring planet that orbits its star in the wrong direction, and by an extremely rare stroke of luck, orbits its star in a nearly circular orbit (eccentric orbits are not as conducive to life). Would the sentient species that arises, seeing that their planet orbits in the opposite direction from all the other planets in their star system (and later, they discover, around other star systems as well), think that this is a sign that they are special above all others? When they later find life on other planets, and find that those planets orbit with their star, would they think them inferior, or infidels?

Of course maybe they would reason differently than humans. Maybe they would think the opposite. Or have little emotions and thus not really moved one way or the other, other than curiosity as to why their planet is different.

By they way, the planet gets its name for the SuperWASP (Wide Angle Search for Planets) program, not because it is a planet inhabited by hymenopterans, or by white Anglo-Saxon protestants...

The Sun's Twin? (and does that mean another Earth as well?)


of the 1,000 nearest stars within 3 dozen light-years, only one matches our Sun's temperature, size, and luminosity and has the same precise spectral class of G2V (a main sequence star with a surface temperature of about 9980 degrees Fahrenheit...).

One in a Thousand

That twin star? Alpha Centauri A. As Bob Berman points out - of all those 1,000 stars the only one that is the Sun's close twin is also the nearest naked-eye star (4.35 light-years away). An amazing coincidence.

Hopefully the new generation telescopes, especially the whose main tasks are to search for exoplanets, will aim their sights on the Centauri trinary system. It would almost be criminal not to take a closer look. If there is a terrestrial planet circling Alpha Centauri A, the new generation telescopes should be able to find it. With Alpha Centauri A a bit older than the Sun, unless life evolved on Earth quicker than usual, a terrestrial planet in a habitable zone around Alpha Centauri A would have had plenty of time for sentient life to arise.

Of course, maybe sentient life does not survive its early years of sentience and there is no longer any sentient life to discover... But let us be optimistic for a moment and say that it survives. 4.35 light-years away would allow for communication via radio waves or laser. Sure, it would take 8.7 years for each message to be answered (4.35 years for it to travel there, and 4.35 years for the answer to travel back), but it still could be done.

But should we try to communicate with them? The wonders are tempting, but there is the possibility of danger...

Scientists at Howard Hughes Medical Institute are closing in on how life arose from inorganic material. RNA was first thought to be essentially a way of storing the genetic information need to build proteins. But Tom Cech and Sidney Altman discovered in  the 1980s that RNA can catalyze cellular chemical reactions. This led some scientist to speculate that RNA may have come before DNA. RNA may be one of the "missing-links" in the evolution of DNA from simple chemicals.

Dr. Jack W. Szostak  and his team looked at montmorillonite, a clay mixture that existed in the early Earth, and discovered that it helped
The result is a cell-like structure.

So, the creation myths that involve life being formed from clay may be on to something after all.

The above chemical processes ended up creating a cell-like structure. Life is a natural result of certain chemical processes that build on each other. A watery terrestrial planet in a habitable zone will have weathering of rocks, forming clay.  If the laws of chemistry are the same throughout the universe (or even in just our galactic region), then life will arise on more than just our planet.

The Future for Some Habitable Moons

I was watching BBC's 1999 miniseries The Planets (shown on the Science channel) recently; they were showing several episodes in a row.

In one episode they discussed how Saturn's rings will, eventually, vanish. But that the moon of another outer planet, Neptune, would break up from tidal forces as it slowly spirals in toward the planet, creating another planet with rings rivaling that of Saturn's lost rings. We would swap one ringed planet for another.

Yes, Neptune already has a ring system, but it is very dark - being comprised mostly of rocky debris while Saturn's bright rings are comprised mostly of ice. Neptune's moons are composed of rock and ice - a break up of, say Triton (one of three moons in the solar system with an atmosphere), would create a ring of ice around the planet, giving it a shimmering, shining ring system.

This got me to thinking about the habitable moon discussions. Tidal forces are what help heat the moons (if Europa has liquid water under its icy surface, for instance, it will be the result of tidal forces). The very tidal forces that would allow for the possibility of life, which would allow for a moon to be habitable, may also signal its early demise - if the moon is slowly spiraling in.

So, for some habitable moons, their lifespans may be shorter than those of habitable planets. Which has a bearing on the rise of high order sentient life. High order sentient life probably needs a very long time to arise. Imagine being an alien race finally creating technology and exploring their solar system, only to find that their world will die long before their sun will.

Of course the flip side of the coin is shown by our moon. The Moon is slowly spiraling away from the Earth (at 3.8 centimeters, or about 2.5 inches, per year). However, while in 500 million years or so there won't be any full eclipses anymore, we won't lose the moon. Eventually the Moon and the Earth will become gravitationally locked together. At some point the Earth and Moon will become locked - the same side of the Earth will always face the same side of the moon. When that happens the Moon will quit spiraling away from us.

Why? It has to do with the fact that the Earth has large oceans. Right now the Earth rotates faster than the Moon revolves around it. The tidal bulge created by the Moon's gravitational pull moves ahead and actually forces the Moon to speed up a tiny bit. This causes its orbit to get larger. When the Earth and Moon are locked, the tidal bulge won't move faster than the Moon. High tide will be permanent in some areas, and low tide permanent in others. 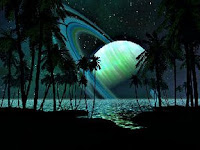 I still believe that we may find more habitable moons than habitable planets. But that some moons may spiral into toward their planet billions of years before their system's sun(s) die, will be one reason why it may be harder for high order sentient life to arise on some moons.

Scharringhausen, Britt. "Is the Moon moving away from the Earth? When was this discovered?" Curious About Astronomy: Ask an Astronomer. Cornell University. 21 nov. 2002. Web. 24 Aug. 2009. <http://curious.astro.cornell.edu/question.php?number=124>
Posted by David M. Merchant at 8:54 PM No comments:

The Future of Human Evolution.

Technology Singularity - Or, We Are Borg

The overlap is particularly salient when it comes to speculations regarding the technology singularity - when technology advances to the point that it becomes sentient. This advancement also allows sentient races who feel they have reached the limits of what biology can do for them to integrate themselves (partially or, eventually, fully) with advanced technology/machines. This is also referred to as "postbiologic." Some scientists feel this technology singularity may arrive for the human race as early as 2040, though most feel that it is more likely to be much later, the year 3000 or so.

For more information about universal biology, visit my initial post on the topic, Universal Biologies?

For more information about postbiologic evolution or the technology singularity, visit my post Robot Aliens, The Tecnological Singularity, and Where did I leave my Borg party body?
Posted by David M. Merchant at 2:39 PM No comments: