"Dark Matter" © DigitalBlasphemy.com
I was checking out astrobiology groups on Facebook and came across a discussion on astrogensis at the "Astrobiology - Life in the Universe" Facebook group. An entry by one poster made the statement "With regards to panspermia, distances are simply too vast for living organisms to be transferred from beyond the solar system." Let's take a closer look at this problem.

The problem stated is one of vast distances - the time for even a fast traveling extraterrestrial asteroid from even the closest star system would take an exorbitant period of time. If the average speed of an asteroid in the main belt is around 47,000 mph, and the distance to Alpha Centauri is 4.4 light-years or 25,848,247,139.8 miles (Proxima Centauri is sometimes closer, but let's go with the main star), then it would take that asteroid about 101,304 years to reach Earth.

Recently, bacteria have been found buried deep in solid rock - bacteria with very slow metabolic states and are probably thousands of years old. Penn State scientists discovered in Kalaallit Nunaat (Greenland) dormant ultra-small bacteria (Chryseobacterium greenlandensis) trapped 2 miles deep in 120,000 year old ice core samples. The scientists were able to bring them back and found it needed few nutrients to live. The scientists figure their small size helped them so survive trapped so long in the ice. Some studies indicate some bacteria can live suspended in sediments, amber, and halite for millions of years. In 2007 a group of scientists published a paper provided evidence for bacteria surviving in some frozen permafrost samples up to a half a million years. We have seen from other posts the ability for some bacteria and viruses to survive the vacuum of space. In a previous post I reported that even the small, multicellular Water Bear can survive periods in space - including normally deadly doses of ionizing radiation (Water Bears in Space!). 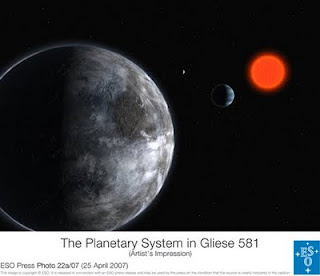 With Alpha Centauri 101,304 years away (by asteroid) and bacteria that can lie dormant for at least 120,000 years (and especially those that can lie dormant for 1/2 million years), it seems that some unicellular life could theoretically make the trip. The red dwarf planetary system Gliese 581 (with one planet that is warm and terrestrial) is 20.5 light-years away, or around 471,984.5 years away at main belt asteroid velocities. Still within the range of some unicellular creatures. We have seen in earlier posts that there are scenarios where red dwarf systems can be hospitable to life.

There is something else to consider as well. Our solar system is not a fixed point in the galaxy. Some researchers feel that the Sun had some close encounters with other solar systems during its 4.6 billion years of existence. The distance that a bacteria hosting extraterrestrial asteroid could have been even smaller than 4.4 light years. Some scientists feel that the Sun may have had a close encounter with another star 4 billion years ago - a very close encounter: the other star may have come as close as 14 to 19 billion miles (Neptune is 4.7 billion miles away from the Sun). That is close enough for major gravitational permutations of each solar system - including the possible exchange of an outer planet. That's right - our solar system could have, in its outermost reaches, a planet from another system left behind from this close encounter.

Let us say the other system already had life established on it. The close encounter with our Sun could cause asteroids to be jostled and sent colliding into the system's life-bearing planet, throwing up chunks of the planet into space. One of those chunks could have been captured by our solar system and eventually made it to Earth (just like some Martian "chunks" have made it to Earth, the result of some asteroid impact on the surface of Mars ejecting Martian rocks into space). Or the other system could already have asteroids with dormant unicellular life on them left over from collisions it had within itself before encountering the Sun, and one or more of those asteroids captured by our solar system.

As reported today at Daily Galaxy, scientists reported in the ACS’ Journal of Physical Chemistry B that DNA seems to have almost "telepathic" abilities to recognize other DNA strands that are similar to it - even when there is no physical contact and no proteins to act as messengers. Similar DNA strands seem to recognize each other and gather together. There is no known chemical explanation for it. DNA strands need to recognize similar strands as part of the replication and repair processes.

The reason I find this of great interest is that it adds further support that life is a natural result of the physical (and thus chemical) laws of the universe. Amino acids, which DNA are composed of, are very common in the universe - from meteors to gas clouds. If they have some innate ability to gather together, this, I feel, helps increase the chances of life arising on more than just this planet. It makes the arising of life on Earth billions of years ago, and the evolution of that life, a little less dependent upon mere luck.

We Choose the Moon
Source: wechoosethemoon.org

Wechoosethemoon.org is an interactive experience recreating the historic Apollo 11 mission to the Moon in real time. Once where only three men made the trip, now millions can. Live event begins 9:32 AM EDT July 16, 2009. Exactly 40 years after Apollo 11 lifted off.
Posted by David M. Merchant at 1:54 PM No comments: