Before we can discuss the possible alternative extrasolar biological, psychological, theological and societal realities that could exist, we need to establish a framework - if one can even be established. Can more than one kind of "biology" exist? For instance, can there be a planet where life is silicon-based and not carbon-based like here on Earth? Are there universal laws of biology? In other words, what are the limits to the kinds of biologies that can exist? The answer to this will help frame the speculations that will follow.

If we accept the possibility of parallel universes, as predicted by many quantum models of the universe, one answer is that there can exist any infinite number of different biologies since each parallel universe will likely have different physical constants and thus different physical properties. Some universes will be very strange indeed. Some will be impossible for any life to form in - a universe where gravity is too weak, or too strong, for instance. Another complication is the hypothesis that even in our own universe, natural laws and physical constants may not be universal - they may vary from one region of the universe to another.

However, for simplicity sake, let's keep our attention to the region of the universe we find ourselves in. That seems the most pragmatic approach, since it is highly unlikely we will ever be able to see into, let alone venture into, other parallel universes, or regions where our local natural laws and physics no longer are in play.

However, even with those proposed, and yet undefined, universal laws, there are still a dazzling wide variety of biological life forms that can exist. Look at our own planet, from the oxygen and light deprived pressured depths of the sea, to frozen rock in Antarctica, to thin-aired mountain tops, to sun-baked deserts, to lush tropical jungles, life abounds in an incredible array of variety. Looking into our past, we find ever more dazzling array of varieties of all shapes and sizes. While not infinite, and not just any form can exist as a viable creature, the boundaries are difficult to see—that horizon is very far away.

Next—some thoughts as to what some of the universal laws and constants, or constraints, are: Universal Biologies: Order From Chaos.
Posted by David M. Merchant at 5:13 PM No comments: 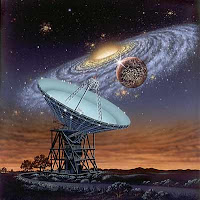 
This blog focuses on extrasolar planetary discussions from scientific research to speculations on extrasolar (alien) biology, communication and linguistics, psychology, society, technology, and theology. This includes commentary on pertinent science articles, reviews of both relevant science and science fiction books and movies, and speculation that they inspire.

Why such discourses? As we move further into the 21rst century, these are topics will gain in importance as we continue to detect more exoplanets, to discover how widespread the building blocks of life are in the universe, and to expand the definition of life. The chances of our detecting life on another planet outside our solar system increase as our technology and techniques increase in sophistication (for example, the ability to analyze the atmosphere of a planet light years away).

Thus, the questions of whether life exists outside of the Earth take on new impetus. For with new life comes the possibility of new sentient life. What would that extrasolar sentient life be like? Pondering this question is not a mater of mere idle speculation. It goes beyond grown up fairy tales. Just as the examination of other planets in our solar system help us to understand our own planet, the examination of life on other planets may help us to understand ourselves. This meditation on other life affects meditation upon our own life.

As T.S. Eliot wrote in his poem "Little Gidding":


And the end of all our exploring
Will be to arrive where we started
And know the place for the first time.

We need to explore, to learn.

Additionally, such contemplations can help us prepare for when we discover alien biologies, psychologies, societies, technologies and theologies.

Brief Background to the Issues

It seems that every few weeks there is another discovery of an exoplanet. As of October 2007 over 200 have been found. As more new telescopes, both on the ground and in space, having greater viewing power than the Hubble Space telescope come on line, the discoveries have not only begun to pick up speed, but ever smaller planets are being discovered as well.

In 2006 the ESA launched the COROT space telescope, designed to detect planets not much larger than the Earth. It began searching in Feb 2007 and has already found additional planets. In 2009 NASA plans to launch the Kepler space telescope, also designed to search for extrasolar planets. The James Webb Space Telescope, with a possible launch date of 2013, will be the replacement for Hubble, with greater observing powers than its predecessor. DARWIN, an European Space Agency proposed space telescope with a possible launch date of 2015, will be able to detect directly an earth sized extrasolar planet - with enough detail that we may even be able to determine if there is carbon-based life on it. In 2005, Dr. Webster Cash of the Univ of Colorado at Boulder, had his New Worlds Imager project funded by the NASA Institute for Advanced Concepts (NIAC). The project plans to build a large pinhole camera in Earth orbit capable of detecting Earth sized extrasolar planets up to 32 light years away. So far there is no proposed launch date. Even more extrasolar planet mission exist or are planned: for more information visit the Jet Propulsion Laboratory's "Planet Quest: Missions" page.

From a different angle, the newly powered up Allen Telescope Array, a SETI project, will increase the chances of detecting signals from extrasolar civilizations (those who have advanced to a technological level).

The next logical question, though, is how many extrasolar planets can harbor life? First, the building blocks of life, from simple chemicals like Carbon and water to more complex amino acids, are found throughout space in interstellar clouds, planetary disks, meteors and comets, and the atmosphere of exoplanets, as being expelled into space by dying stars. Some even theorize that is how life began on Earth - it was seeded from the heavens. Second, planets are being found (whole or forming) within the "habitable zones" of their parent stars (basically, the zone around a star where liquid water can exist) - a recent one is the fifth planet to be discovered around 55 Cancri.

Around the sun, the Habitable Zone is 0.95 to 1.37 A.U. However, life could possibly exist beyond this zone: scientists are now contemplating the possibility of life existing on Europa (there is a thin atmosphere of oxygen and quite possible a liquid ocean underneath the planet covering ice sheet). And finally, as we keep finding on Earth, life is tenacious - we are finding life everywhere on this planet, under an increasing range of conditions, including extreme conditions of no oxygen, boiling water, and frozen ice.

Because life can thrive under a wide range of conditions, it is most likely that alien life does not need a Earth duplicate on which to form and thrive, and thus it will be an astronomically minute chance that alien life will be duplicates of Earth life. There is a vast range of variables that can affect the direction alien biology takes, which in turn can affect the alien's psychology, society, technology, and theologies.

I don't want this blog to be one-sided. Please feel free to leave comments, whether to challenge or to support a speculation, or to suggest other references and resources. It is my hope this blog can be beneficial to its readers, including amateur philosophers, students looking for essay topics, and science fiction writers looking for ideas to stimulate writing, as well as for space science and/or science fiction fans.