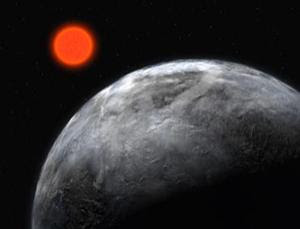 Did you know that our own sun is in fact a dwarf star? It is a G type, or yellow dwarf. Next come the smaller K types, or orange dwarfs, followed by even smaller M types, or red dwarfs. While we know life has - at least once - arisen in a yellow dwarf system, could life arise on orange or red dwarf system? While the answer may be yest to both, some think that orange dwarfs may actually make the best place to find life.

As you can tell, as the size decreases, the temperature decreases as well as the luminosity. The width of the Habitable Zone (HZ), thus, decreases as well and moves closer to the star (see illustration below) . But HZs still exist. And red dwarfs are extremely long lived - up to 10 trillion years - giving life plenty of time to arise. However, there are other considerations that need to be factored in. First, some tectonic activity is needed to help control the amount of C02 as well as for mixing chemicals - life needs to arise on a chemically dynamic planet. However too much tectonic activity can wipe life out. Planets orbiting in a red dwarf's HZ may experience extreme tidal forces. Another problem with red dwarfs is that being so close to the star there can be problems with radiation bursts from the star - red dwarfs tend to be rather cranky stars that frequently flare up, releasing dangerous bursts of radiation. Since the average HZ for a red dwarf is only 0.1 to 0.2 AU away, the HZ for a red dwarf may actually not be very hospitable. By the way, the HZ for yellow dwarfs, like our sun, is 0.8 AU to 2 AUs.

The average HZ for orange dwarfs is 0.3 to 1 AU away. Its HZ is wider, allowing for planets to be further from the star and thus experience less tidal forces. Also, their flare activity is only slightly more than yellow dwarfs. Another consideration is that orange dwarfs are longer lived than our sun - they have almost twice the life span: almost 20 billion years compare to the 10 billion or so years for our sun. Their light and heat output is much more stable than the sun, fluctuating less over its life and thus making more of its long lifespan useful to life. Orange dwarfs may just give life more chance to originate and thrive than yellow dwarfs like our sun. While not as common as red dwarfs (the most common star type), orange dwarfs are 3 - 4 times more common than yellow dwarfs. We definitely should not overlook orange dwarfs when searching for extraterrestrial life.

Red dwarfs do have their supporters: the "Living with a Red Dwarf" Program, established at Villanova University by E. F. Guinan and S. G. Engle. Guinan and Engle, in their presentation at the 8th Pacific Rim Conference on Stellar Astrophysics in 2008, bring up an interesting consideration: the dangerous flares "are strongly dependent on rotation, and thus age, and diminish as the stars lose angular momentum and spin-down over time via magnetic braking" (Guinan 1). What this means is that the intensity and frequency of a red dwarfs solar flares may diminish over time. Since red dwarfs are extremely long lived, that does crack open just a bit further the door of opportunity for life to find a way to arise and thrive.

One interesting result of a planet orbiting in an orange or red dwarf's HZ is that it will most likely be phased locked because of the tidal forces; like Mercury is to our Sun, or the Moon is to the Earth, the planet's rotational period and orbital period will be the same, resulting in the same side of the planet always facing the star. This can create a small zone along the terminator line (where, on a phase locked planet, day and night perpetually meet) where life may be able to better survive the radiation bursts.

For an interesting related post, see the Color of Life post which tackles the question of what color would plants be on planets circling different types of stars.

Another Reason Water is Important for Life 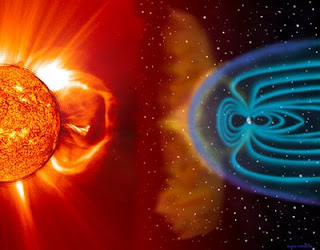 A new theory says that salty ocean currents may be an overlooked source for the Earth's magnetic field. A magnetic field is important to protect the planet's surface from damaging ultraviolet rays. But it also protects the atmosphere from the eroding effects of the energized particles of the solar wind - though it is imperfect protection - the magnetosphere is responsible for causing some leakage by funneling some of the energy into the upper atmosphere and heating it up.

This still does not rule out life developing on desert planets, especially planets with higher gravity and thus thicker atmospheres. I wonder if a large habitable moon circling a gas giant could benefit from the giant's magnetic field?

However, if it turns out that our oceans contribute to our planet's protective magnetic shield in no small manner, then it adds impetus for us to search for planets with large bodies of water.

Tidal Mixing and the Rise of Life

Water, as mentioned in earlier posts, may also be critical when combined with tectonic activity (whether from internal forces or from external tidal forces generated from orbiting a large gas giant) to the rise of life. For example, as mentioned in an earlier post (Life Outside the "Zone"), some scientists feel that the Moon was essential to the origin of life on the Earth due to the tidal mixing which helped to mix, mainly from erosion caused by the tides, chemicals from the soil with the oceans, creating the chemical soup from which life arose.

In two earlier posts I mentioned how some alien races may communicate via light instead of by sound (Music and
Alien Technology - 1. Biology/Physiology - Part II). This may not be so far-fetched. On Earth there are creatures that are capable of communication via light. 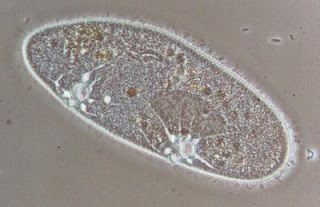 © Animation Factory
Of course, the paramecium is not the only Earth creature to communicate via light. Lightening bugs, for instance, communicate through bioluminescence with the male lightening bug flashing its glowing pickup line as it flies around looking for a mate. While it is a big leap from simple organisms to higher level complex sentient beings, when searching for other sentient life, we need to look beyond our terrancentric views - not all intelligent lifeforms will be like humans.

Some in the SETI field feel that some alien civilizations may actually communicate by laser light rather than radio signals. For an alien race that communicates personally via light, it may be more natural for them to use light for space communication. Instead of a radio signal, our first contact from space may not be flashes of light.

Parallel Universe - are some aliens ourselves?

Dr. Max Tegmark, Cosmologist from the University of Penn., discusses in his essay "Parallel Universes" the possibility of four levels of parallel universes. Levels 2 - 4 involve different universes, but a level 1 parallel universe exists within our own. As Kyle Broflovski's mom would say, "What-what-what!?!"

At first thought, Mrs. Broflovski's reaction would be warranted. But think a minute about the wacky nature of infinity. If our universe is infinite, and the laws of physics remain the same, then in an infinite universe there has to be other conditions that create other Earths - with another you living on it.

Dr. Tegmark states that these parallel universes are regions that are beyond our cosmic horizon - that is, regions beyond the limit of our ability to see or detect (approximately 40 billion light years. We can see 14 billion light years away, but because of expansion, by the time the light reaches us, the object we see is now 40 billion light years away). This region of space is the Hubble volume or horizon volume. Since we cannot see beyond this volume, it can be considered a "universe." The other regions are other "universes," some being parallel to ours. All the regions are contained by one multiverse.

As mentioned above, each "universe" is a Hubble volume. Conservatively, the nearest copy of our Earth is 10^(10^29) meters away. However, Dr. Tegmark admits that the nearest copy could be much closer (for the mathematics involved, see his section I of his essay). Infinity may predict that on very rare occasions similar (or even exact) Earths would be within contact range of each other.

Differences Between Level 1 and Level 3

Hello Me, This Is Me

Some aliens can be different copies or versions of us. Maybe one day we will receive a signal, and we will think it was our own somehow bounced back, but no, it will be from another Earth.