My Brother/Sister, the Alien

In Confessions of an Alien Hunter: A Scientist's Search for Extraterrestrial Intelligence

(a full review is forthcoming), Dr. Shostak, in his brief mention of panspermia as one possible way life originated on Earth, brings up an interesting point about panspermia:


Panspermia's importance would change if life could survive in rocks that travel not just between adjacent planets but between the stars. If interstellar infection is possible, just a few points of genesis - or even one - might conceivably seed the entire galaxy. So life's beginnings could be highly improbable, but life's distribution could be widespread. In essence, the "biosphere" would extend over light-years. (88)

Thus, if life originating on its own is rare, we can see a scenario where that life eventually spreads throughout the galaxy. We would all be members of the same galactic biosphere - brother and sister creatures in one galactic family

Another way life can spread from one genesis is seeding by an early alien sentient race. This is a notion used by some Hollywood writers. In many science fiction shows we often see humanoid aliens. One reason is that especially for early Hollywood, humanoid aliens were easier on the special effects budget, thus sometimes writers and producers explained the similarity among humans and aliens by using the idea of early race spreading their DNA throughout the galaxy. For instance, in a Star Trek: The Next Generation episode (Season 6 episode "The Chase"), we discover there was an ancient race that seeded the galaxy (leaving clues in each "offspring's" DNA), thus explaining why so many alien races looked so similar. Why would sentient aliens purposefully seed the galaxy? It may be difficult to understand their motivations for sowing their seed amongst the stars, but some possibilities are:
The Grand Diversity of Life

But even if the residents of the Milky Way are related,  life, as we have seen on Earth, comes in a stunning array of diversity. From the deep sea, to deep mines, to hot springs, to tropical forests, to arid deserts, to perpetual frozen ice caps we find life in a myriad of forms. If we look into Earth's past via the fossil record, we find even more strange life forms. Extend this into space, onto other planets, and even if there is a common biosphere bound, the variety of expressions life can take will be mind boggling.

Or, My Half-Brother/Half-Sister, the Alien

In addition, even if life originating on its own is a rare occurrence, in a galaxy of hundreds of billions of stars (estimates run between 200 - 400 billion) and with even more planets (possibly a couple of trillion), there is the possibility that life has originated independently in at least a few places. There could be several galactic families. One wonders if primitive, slow metabolic germs from different origins land on the same planet, would there be a possibility that they could intermix, creating a hybrid life form.
Life in the (Extremely) Slow Lane 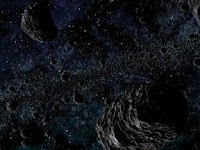 But back to the rare origin idea. Dr. Shostak is skeptical of this idea as this would involve million year rides on blasted (from a meteor impact), life-infected, rocks through the harsh vacuum of space. However, as I discussed in an earlier post, Panspermia, Long-Lived Bacteria, and Interstellar Distances, scientists have found microbes with very slow metabolisms that are over a hundred thousand years old living deep (as in miles deep - never seeing the light or fresh air of day) in rocks, and others that have survived lying dormant for a half a million years deep in permafrost. Some studies indicate some bacteria can live suspended in sediments, amber, and halite for millions of years.

So maybe there is a galactic biosphere. Aliens that come to realize this may develop philosophies and  theologies that accepts all life on all planets around all stars in the galaxy as extended family.

One way to answer this question is to find life on another planet - even "just" microbial life. If we find that life originated more than once in the same solar system, it is a strong indicator that life originating on its own is not all that rare. It does not mean that panspermia is not an ancillary method, but that the galactic biosphere has gotten more complex and is, in fact, a large collection of individual (though not necessarily isolated) biospheres.