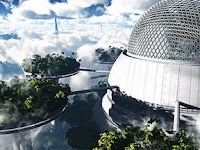 "Enclosure" © DigitalBlasphemy.com
One important area of research for engineers is the area of human factors science or design -understanding and applying the properties of human capability to the design of technology (a somewhat oversimplified definition). The capabilities of the human being has to be taken into account. Some are obvious factors (when you are not speculating about non-human species) are such things as: humans are bipedal, have five fingers, and their knees bend inward not outward like some birds, to name but a few. There are many human factors that influence technology including, but by no means limited to, from how something is physically designed, to safety mechanisms that need to be installed, to what kind of assistance the human operator needs to operate the technology.

What does this mean for aliens? What it means is that what works for a human may not be the best solution or the solution chosen by an alien. An avian sentient species would need greatly different technology for sitting and control mechanisms (I wonder if a sentient creature that is used to flying, would look to fly beyond the atmosphere sooner than a terrestrial or especially an aquatic sentient species?). A creature that looks more like an octopus than a human would need different seating and control mechanisms as well. Having more fingers, lacking any fingers, having a tail, having more than two eyes, hearing different frequencies, not being able to hear at all, and any number of other physiological differences will affect what the technology will look like, how the species would communicate, and thus affect how we (humans) can find and communicate with an alien race.

And it is possible that there could be some intelligent species that cannot use technology (at least as we commonly define or have commonly come to think of as technology) or which may not have a pressing need for it, or are much slower in developing it because of their physiological limitations. Say, for an extreme example, there are long lived creatures with very slow metabolisms that communicate through touch or biochemical means and who carve out structures within boulders or large masses of rock by secreting acid - such creatures could eventually develop a complex society that discovers complex mathematics, and which ponders the deep questions of "being" and "existence" and the meaning of life; but certain technological development could be very slow - at least the type of technological development that includes physically exploring space and the ability to communicate beyond their planet.